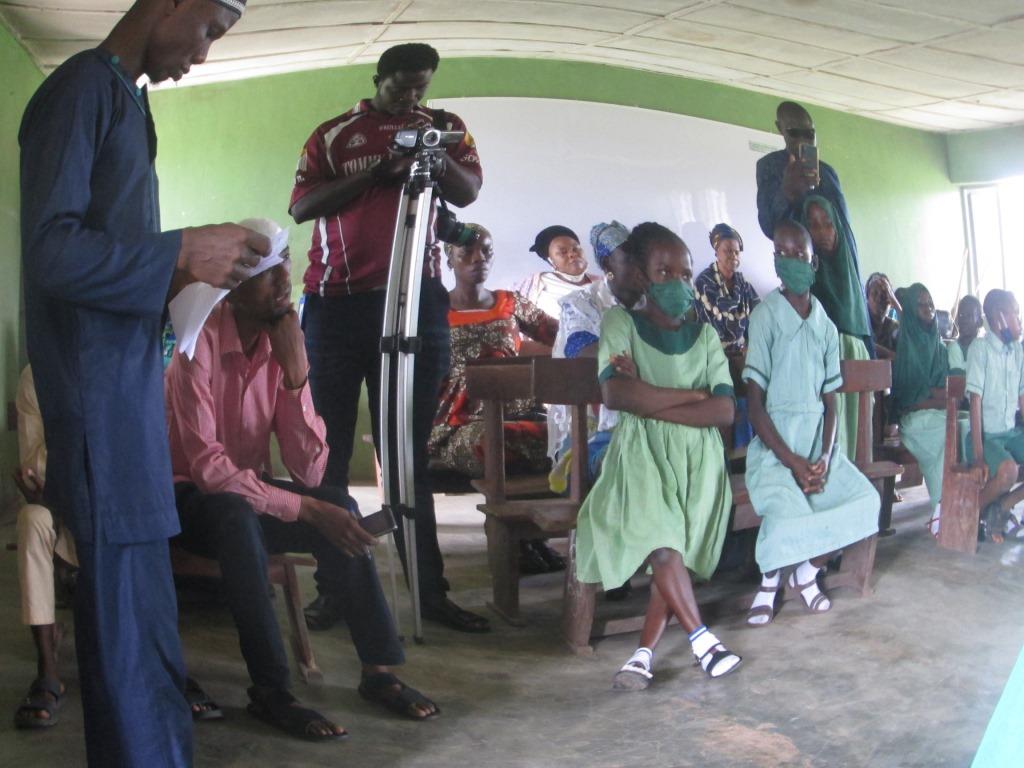 29th September 2020 would be a memorable day for the family of late Alhaja Sariyu OdunOla Akinlabi the Iyalaje of Iberekodo-Igboora, and parents, teachers and primary six pupils of Ansar-ud deen primary School, Sagan-un, all in Ibarapa Central Local Government of Oyo State on the occasion of presentation of books and cash sums of money to brilliant out-going primary six pupils of the school.

The Children of the departed donor who were represented by Alhaja (Mrs.) Segilola Bidmoz urged parents to train their ward so that they could give them comfort later in life. She recalled that the children of the late donor bought pleasure car and staffed the car with a driver for their mother to ease her life for many years before she passed into glory. She further urged the parents to struggle hard to train their children so that they could replicate this type of event in future in their memory too. Other speakers at the event spoke in similar vein.

The Oluaso, His Royal Majesty used the occasion of the event to plea for cooperation of his subject to contribute to security fund of the community to provide night watchmen to save guard lives and property in these children, their mothers and the community as a whole.

The Ag. Chief Imam of Ansar-ud Deen Society, Alhaji Musulimi Aarinola hinted the gathering that many development structures from donor agencies including a library had eluded Ansar-ud deen Primary School, Sagan-un this year because of absence of a physical fence that could provide all round protection to the School’s property. He urged old students of the A.U.D School to organize themselves to give the school a befitting fence. He also reminded well wishers of Ansar-ud deen Society to remember Ansar-ud deen Grammer School, Igbole – Igboora which is run as a fee paying school and which has been struggling for survival because students were not paying their fees. The Imam also sought support for A.U.D. Primary School at Babalokuta, near Igbole-Igboora.

During her turn to speak, the Local Inspector of Education (L.I.E.) Mrs. Oluwayemisi Adeyemi praised Governor Makinde’s efforts at improving education in the State. She cited the regular payment of teachers and workers’ salaries, entitlements and provision of writing and text books to school pupils by the Government as part of educational spending to improve education in the State. She urged parents not to abuse government efforts, rather, parents should support Government efforts by providing further needs to their wards education. She said; parents should train their children in learning, skills acquisitions and entrepreneurship training and to shun ostentatious living in order to have funds to provide enough for their children educational needs. The Education Inspector remarked that if she could have at least a dozen of this type of support from families and groups to pupils, students and schools she would be glad.

She told the parents that attended the ceremony to realize that they are lucky. She illustrated her statement by recalling that during one of her supervision of schools, she met a child who ate an egg for the first time during the school feeding program. She recalled to the bewilderment of the audience that while food were being distributed, she saw the child took his egg and started sucking it not knowing that he should bite it. When told to bite and eat it and unknown that he was still being watched, the pupil bit a portion of the egg, swallowed it and pocketed the larger part of it.

The L.I.E. further revealed that she friendly confronted the pupil to ask why the pupil was licking the egg did not eat it. His reply made her to weep. The pupil told her that they are three of same parent. She further narrated that the boy told her that he had a sister in senior primary and another in the secondary where they don’t have opportunity of free feeding. The little boy said that he had to preserve part of the egg for her sister and elder brother who had not eaten from home to share of his meal. He told the L.I.E.

that it was being junior that he was given the privilege of food before leaving home for school. It was at this point that the L.I.E said she wept having realized that the boy, as little as he was, could know and feel the pain of hunger that could be felt by her senior sister and brother – a situation of the poorest of the poor.

Speakers were unanimous at advising the parents of the star award winners to open bank accounts in the name of their wards and to spend the award specifically for future educational need of these pupils. The mothers promised to heed the advice.

Others were the Local Inspector of Education (L. I. E.) – Mrs. Oluwayemisi Adeyemi, an Administrative Officer of Local Education Department – Mr. A.O. Ayoade, retired Director of Education, State Ministry of Education – Akogun Fola Bidmoz, the School supervisor – Mrs. Ayoola Adewunmi Adebayo, the Head Master – Mrs, Risikat Aarinola and some teachers. The cream of Iberekodo Traditional chiefs were also not left out. These included the Jagun – Chief Muritala Balogun, the Asalu – Chief Oladosu Idowu, the Osi – Chief Kasali Adejumo, the Bansa – Chief Muhammodu Raji Dauda and the Adele – Chief Afolabi Lasisi. These lists of the cream of attendees illustrate the importance of educational events generally to the Community.