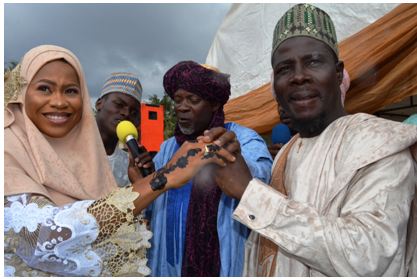 An Imam is a male Muslim scholar, a model religious Leader, a Priest, a Counselor and a Family head, all roles in one person. Therefore, an Imam is public figure whose action is of public concern.  Like all human institutions, Imams is therefore a role function, an institution and a status. He could be described by ranks, coverage or ideology.

That being clear, the issue of taking a wife anew or in addition to existing wives is permissible in Islamic Law but under certain stringent conditions such as availability of economic resources by the groom, strength by the groom to provide biological succor and his capacity to ensure equity, fairness and self-restraint in the conduct of his relationships between him and each of the wives and the conduct of relationship among the wives.

And so, having being satisfied that he is capable to fulfill at all times the aforementioned stringent conditions; and having gained the love and consent of his wives at home,

the consent of the new wife and the bride’s parents, the Imam of Olorunsogo Central Mosque, Oloko at Apata flank of Ibadan, Oyo State of Nigeria, Sheikh Tirimidih Murthadah took a new wife at a sober ceremony held at the open Field of Bembo Games Vilage, Apata, Ibadan recently on Saturday 5th September 2020 at about 2.20pm..

With solemn music of ‘Bandiri’ drums and the ecstasy of a having a new bride, the groom; Imam Tirimidih Murtadha, a young man in his forties was accompanied in dancing steps by young friends and Alfas to the officiating table for conjugal blessings of the seated officiating Imams and the brides parents.

Leading the train of her group to the officiating table at the succeeding phase of the program was the bride; Miss Aminat Muhhamoh the daughter of a prominent Alfa and Muslim Scholar; Sheikh Muhhamoh Alasoro. She was accompanied to the Nikkah officiating table by about 23 female friends with pomp and pageantry dancing in symmetrical steps to the rhythm of popular Fuji songs anchored by Lagos based Dj; Watson of The Mix Kit group. There was exchange of marriage rings at the officiating table.

And at the reception ceremony, expectations were high that with the modern setting at the ceremony would prompt the social rules of engagement in Muslim ceremony to be broken, but lo! and behold, it was not broken. With the music of Sarumi, Salawa Abeni (congratulations), Fuji Garbage, Fuji Megaster and so on that later dominated the ceremony, the event was thrown into frenzy of full blown social ceremony from its initial religious tag and rituals. Despite this change over of the event to full social activities, it was instructive that no alcohol was used during the Nikkah blessings, the reception and entertainment ceremony.

Side observations also revealed the varied fascinating and competing attires and turbans by religious leader; captivating head caps worn by young men were deliberately sloped on their heads to attract attention of persons best known to them. Other side activities were the show-offs by ladies publicly rehearsing the wearing of their head gears and many women on conspicuous parade of their dresses.

During the reception, there was cutting of cake an event chaired by Alfa Agoro.  Observations further revealed that the event earlier thought to be endangered by potential for un-Islamic actions ended up in piety with successful control of Islamic dos and don’ts. It was Congratulations galore to the couple, the groom’s senior wives, the bride’s parents and the officials at the ceremony.