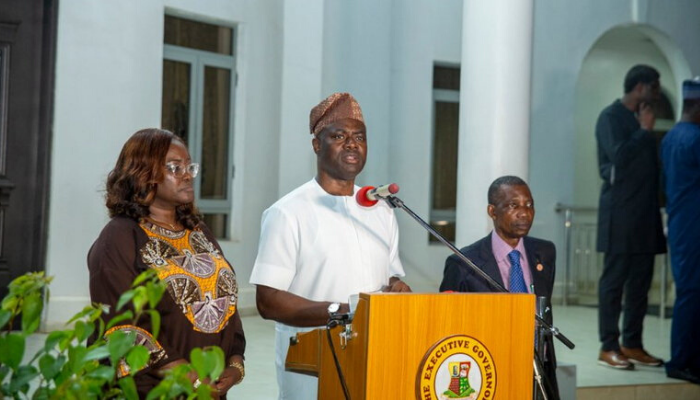 The interviewer had pointed to controversies surrounding measures taken so far by Governor ‘Seyi Makinde and asked Muraina to respond to some of his colleagues such as distinguished Senator Teslim Folarin of APC, Senator Fatai Buhari and Hon Sadipe who still feel so strong that the idea of partial lockdown of Oyo State by Governor Makinde, is dangerous. The trio of Federal Legislators have further maintained that the idea of shutting down the State between 7o’clock in the evening and 6 o’clock in the morning is just scratching the surface and is out of moment as far as they were concerned. The Governor had consistently felt so strongly that it was pointless to lockdown when all the palliatives are not already in place; the broadcaster asked Hon Muraina to weigh in on these?

Muraina who described himself as “a thorough bread Yoruba man and party man who should not jump his leader” to speak on any issue without his leader’s permission believed that on this occasion telling journalists about their service to the people, he has the tacit approval of the Governor, his leader to speak. Muraina added that Governor Makinde has spoken well on this matter.  He said his national Assembly members who are urging for total lockdown in Oyo State are just trying to make mountain out of a mole hill and that there was nothing practically wrong with what his Excellency has done.

Muraina, a Lawyer with Doctor Philosophy Degree in Law explained that first and foremost, Governor has closed all the borders entering Oyo State and then he imposed curfew from 7pm to 6am throughout Oyo State so that infected persons from elsewhere would not be smuggled to the State under the cover of the night without being found. He said, to him, “…we should appreciate his (Governor’s) ingenuity on this”.

Secondly and most importantly, “the Governor is at the driver’s seat, he is the Chief security officer of Oyo State, by virtue of his position, he has access to peculiar facts and circumstances which others don’t know and which at this stage he may not be in position to disclose to anybody and which I believe must have justified his decision not to lock down the State now. I think at this stage, there is no universally acceptable response all over the world. It is just a question of trial, trial, and trial. You cannot therefore condemn any approach”, Muraina pointed out.

Further justifying his support for Makinde Covid19 measures, Muraina said: “even in the United States and other countries, there are States that have not locked down till now. Even in Nigeria here, Ogun State that was ordered to lock down by the Federal Government prayed for some days of extension before locking down. I believe that the Governor thought wisely and has taken decision anchored on the wellbeing and welfare of the vast majority of our people. I am sure he is going through this situation, thanks to God that he is now fully back and if there is need, God forbid to lockdown, I am sure he will definitely do the needful.”

Hon Muraina urged the people of Oyo State to disregard in-to-to the alarm on the alleged need to lock down. The people should rather care to enjoy the firm success of his Excellency for the State and the Governor will not let them down,” Muraina pleaded.

In addition Muraina added that despite the few scarce resources that Oyo State has, the State Governor approached UCH, spent a lot and has obtained approval from NCDC to enable testing of the citizens of Oyo State. He also narrated how he in conjunction with Hon. Kola Balogun, Hon. Yemi Taiwo, Hon. Stanley Adedeji and Hon. Abas Adigun, who are all members of PDP caucus in the National Assembly had protested and co-signed a letter of complaints on the need for the Federal Government to quickly fund Oyo State. He used the radio medium to appeal to the President to immediately fund Oyo State. Hon. Muraina said because of these efforts of the Governor, the money which the Governor had spent on laboratory expenses and other provisions should be immediately refunded to him so that he could apply these funds to some other area.

Concerning his personal efforts at mitigating the social effects of the pandemic on his constituency, complaints received from Ibarapa Central / North Federal constituents by this writer alleged that their Hon. donated 100 bags of rice, a quantity that they considered inadequate. But Hon. Muraina had narrated that in addition to sending small cash to some vulnerable constituents as far as his capacity could carry him, he gave food support by way of several bags of rice to his constituency, Ibarapa Central / Ibarapa North Federal Constituency. He explained that his food relief measure was not only to cushion the impact of this epidemic for his constituents but it was to complement the great and wonderful efforts of his Governor who, he believed was proactively working to contain the epidemic.

In response to similar complaints by citizens over March and April salaries donations by Federal Legislators, Hon Muraina replied that a Yoruba adage says; “eni to di ikuku to ni ki a gba, o ye ki a kii pe o se un.” Literarily, meaning that when somebody with a clenched fist open it to give something, that person should be appreciated for whatever is inside the fist to be given. He explained that in the situation that the country is, nothing is too big or too small to donate.

Meanwhile, Nobel Laurent, Professor ‘Wole Soyinka has advised the Federal Government and States that are engaging in total lockdown to learn from Sweden that is making progress against the spread of Covid19 without resorting to total lockdown.

Also, more States including Lagos and Ogun State that had earlier been lockdown have intermittently been relaxing their lockdown and are even planning further relaxation in the coming weeks. Also during the past week, South West States agreed to close all borders entering their states except for essential services, materials, equipment, foods and drugs. They have also agreed to enforce the use of face masks by everyone in public places in their states along with other preventive measures against covid19 spread. The wearing of face masks in public places to break transmission of the pandemic may be preparatory to relaxation of their total lock down, to par with Oyo Covid19 partial lock down measures, observers believe.

As at press time, the Director General of National Center for Disease Control, Dr. Chikwe Ihekweazu praised the testing and treatment efforts of Oyo State Government to fight Corona virus19. He showered encomiums on Governor Makinde during his visit to Oyo State Infectious Disease Hospital, Olodo, Ibadan, Oyo State Virology laboratory at U.C.H., Ibadan and other facilities that are provided by Oyo State. The Director General said the Olodo Center could be helpful nationally. He urged the Governor to establish more centers in the State as planned by the Governor.