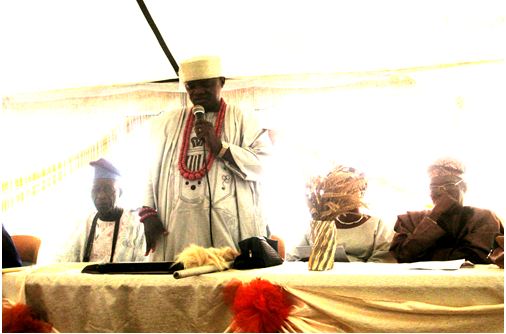 In His speech at the event, Oba Adedamola Badmus praised His Imperial Majesty, the Alaafin of Oyo, Oba Lamidi Adeyemi III and the Government of Oyo State for their remarkable support. He also thanked Iberekodo people for their faithfulness. He announced Iberekodo Vision 20020, a time framed development agenda to take Iberekodo Land to the next level. This include Publication of a comprehensive Book about Iberekodo, Shooting of a Film on the People and their Kingdom, Awards to deserving people and completion of the Modern OluAso Palace furnished with Ai. technology. He announced that the 1st phase of the development project would cost N25 Million Naira (about US$ 69,444.44). He sought for the cooperation of Iberekodo at home and in diaspora as well as other well-wishers to attain the plan.

Gathered under a single tent of about 1,500 capacities, an estimated 650 delegate indigenes of Iberekodo from near and far attentively listened to various speakers at the event. First to speak was an esteemed indigene of Iberekodo; foremost Educationist, Ibarapa Historian, Politician and Cultural Enthusiast; Chief Samuel Oje Morakinyo Phd., the Asiwaju of Iberekodo as he rolled out historical facts and figures to the audience.

Holding the microphone with candor and scholarly dignity, Chief Morakinyo eloquently stirred the stage with a Yoruba proverb “Alafose ki i fo afodanu” i.e. the constituted proclaimer does not proclaim in vain. He thanked God for the visionary spirit that has been given to Oba Badmus, saluted the Elders, Iberekodo Chiefs, fore-bearers of education in the town and the entire people and delegates for the support given to the Oba. He narrated that it is a thing of joy; for which all persons present and well-wishers

of Iberekodo that Oba Jamiu Badmus is the first traditional ruler of Iberekodo to demand to wear a beaded crown in accordance with eminent position of the town in established Yoruba ancient history. Morakinyo allocated this accomplishment to the Grace of God and product of education.

He emphatically told the gathering that the second thing he would talk about was education. He illustrated in detail, critical instances that were made possible due to acquisition of education. Chief Morakinyo further hinged the successful organization of the Iberekodo Summit on pervasive education among the indigenes.

Still cherishing education and for the audience to value education, Morakinyo gladly introduced a first Republic Federal Parliamentarian who was also among the the first two persons to have obtained the Grade II Teachers Certificate in Igbo-ora – Chief Mathew Folorunso Adeegbe. Alhaji Muslim Agboola Adebayo Phd was the second person that passed Grade 2A. along with Chief Adeegbe in 1956. In addition, he introduced the first persons to have reached and passed Cambridge School Certificate examinations in Igboora in 1953 – Alhaji Muslim Agboola Adebayo Phd; a retired Senior Lecturer at University of Lagos and posthumously mentioned late Alhaji (Chief) Nassir Akinlabi, a top Civil Servant in Western Nigeria who both attended and concluded their studies at Baptist Boys High School Abeokuta in 1953. He said most of those at the day’s gathering were product of 25, 30, 40 or 50 years ago. He recalled a Chinese proverb that says if you want a plant for one year plant rice, if want a plant for 10 years plant a tree, if you want a plant for 100 years plant education. Morakinyo regretted that education is deteriorating in Ibarapa today and cautioned that the future belongs to those who prepare for it today.  He therefore urged the indigenes to strive harder to promote widespread qualitative education in order have progress and development in Iberekodo in particular and Ibarapa land in general.

In a modest response to correct a speech made by a top guest during the occasion, Ibarapa Historian and Cultural enthusiast Chief (Dr.) Oje Morakinyo asserted that like the motto of Baptist Boys High School – Nolle Secondus, Iberekodo is second to none historically in Ibarapa land.

Morakinyo illustrated that in 1860 (159 years ago) when a local militant – Agidi, was disturbing the peace of settlements in Ibarapa area, it was the then Baale of Iberekodo who invited his friend, Oderinlo an Ibadan warrior, to assist him to checkmate Agidi of Sagan-un. He said it was after the war against Agidi that Ibadan sent administrators known as “Ajele” to monitor further development in the area and that was the beginning of administrative placement of Iberekodo and other neighbouring towns in the area who recognized Iberekodo for its size and cosmopolitan status; into Ibadan Administrative division. It was therefore after Iberekodo came within Ibadan Administrative division that other neighbouring towns followed, he revealed.

Besides, the only market that was established for Ibarapa area was the market at Iberekodo, Morakinyo asserted.

He further told the gathering that in 1902; about 117 years ago, Iberekodo was the border town where customs and tax duties were collected for entire Ibadan area from persons entering from Abeokuta, Badagry and Lagos area. He concluded that, “all these showed that Iberekodo is the Leader in Ibarapa.”

In his contribution, Dr. Agboola Adebayo who retired in March 1990 from the University of Lagos as a Senior Lecturer in Department of Human Kinetics & Heath Education and now the Head (Olori Ebi) of Ayeleso Ruling House traced the lineage of certain Iberekodo Chieftaincy titles like Asipa and Osi Baale (now Osi). His conclusion and pronouncement of the sanctity and protection of religious faith of all chieftaincy title holders in Iberekodo land attracted loud applause of acceptance by most Iberekodo indigenes present at the event.

Prince Samson Olaoye, a former Head of Service of Oyo State talked about the need for members of the Community to partner with Government at all levels for development. He lauded Oba OluAso of Iberekodo for his developmental efforts including the establishment of Iberekodo High School and for living peacefully with his brother Obas.

Retired Justice Akinteye advised that the Committee appointed by the OluAso on this summit to deliberate on Prince Olaoye’s lecture and other people’s suggestions. Also, Mr. Soji Adeniji another eminent son of Iberekodo suggested that students of Iberekodo High School should re-sing the second stanza of Iberekodo anthem to remind the indigenes of their responsibilities and this was done. He said for a person on a journey who does not have a goal, every hamlet on the road will look like his goal.

The summit concluded to support the Vision 2020 of His Royal Majesty; Oba Jamiu Badmus, including financially. It also accepted that traditional practices will not encumber on the religious faith of title holders. In addition, it accepted that a committee should be set up to consider work out action plan on various suggestions made during the conference.