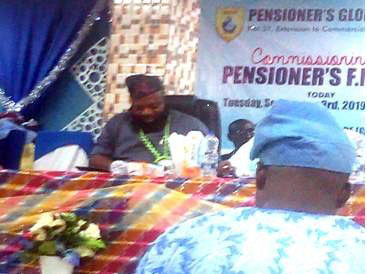 The aged persons by virtue of their age and experience are held in high esteem in many societies. Old age is not a disease, but as the elderly persons advance in age, they are increasingly vulnerable to disease and infirmity.

And so, a few years ago, a multi-million naira Old peoples Hospital otherwise called Tony Anenih Geriatric Center was built by a Nigerian philanthropist – Chief Tony Anenih, and handed over to the University College Hospital, Ibadan to cater for the health care needs of old persons in the country.

Concern for elderly persons in this part of the country did not stop at this. Barely a month ago, 24 July 2019, a private sector organization the Self Reliance, Economic Advancement – SEAP, a Microfinance Bank collaborated with Nigeria Television Authority Ibadan and gathered more than one thousand elderly persons both from the formal and informal sectors of the economy; rejoiced, honored, feasted and gifted these aged persons with high quality Ankara dress materials.

Not ended; the retired elderly persons from the public sector would not let these various laudable efforts of individuals and organizations go un-complemented. They have shown by their various manifesting efforts that although they have retired from active service to the people, they are not tired.

Precisely, the Oyo State pensioners through their Union recently built and completed a gigantic, modern and multifunctional office edifice dubbed ‘Africa’s glory’ at Onireke-Agbarigo area of Ibadan. The office consists of a large hall of 1,000 persons capacity, a smaller executive hall type for seminars and meetings, other apartments to house other purposes such as a pharmacy and primary care medical center expected to help some of the health needs of pensioners and other elderly persons.

Now, a Frequency Modulated (F.M) Radio Station has been built by pensioners of Oyo State through their union, the Nigerian Union of Pensioners – NUP, Oyo State Chapter. The station became the 22nd Radio station in Ibadan although four more stations from neighboring states could be monitored at Ibadan. And this has been Commissioned by Oyo State Governor; Engr. Oluwaseyi Makinde.

The Commissioning ceremony of 3rd September was held at Oyo State Pensioners House dubbed ‘Africa’s glory’ and it coincided with other celebrations of the State slated for the first hundred days of Makinde in office as the Governor of Oyo State of Nigeria.

Amidst passionate eulogies from various speakers to Makinde during the event, the acting Chairman, NUP Oyo State Council – Chief Isiaka Abolade expressed pensioner’s appreciation to Makinde particularly for paying salaries of all workers and pensioners in the State as he had promised. He prayed that the Governor wins more term in office.

National President of Nigerian Union of Pensioners – Dr. Abel Afolayan said he was the happiest and proudest person at the event for the great job done by the NUP Oyo State Chapter in the construction of a gigantic Pensioner’ House as well as the commissioning of Pensioner’s 106.7 FM radio station, tagged “the Voice of Liberation”. He congratulated pensioners nationwide for this success. He solicited the support of the State Government to patronize both the building facility and the radio station. He cautioned pensioners that their visions were worthy of emulation and must not be allowed to die.

Comrade Olusegun Abatan, like a usual labour leader told the representative of the Governor and audience that before the new Governor came on stage, it was 8years of sufferings as salaries of workers were being paid as if it was a matter of favor. Particularly, pensions of primary schools teachers were paid in percentages such that one month salaries were paid in installments for three months, Abatan alleged.

But on “the day Makinde was sworn in Governor of Oyo State, the heaven smiled on the state with showers of rain water signaling that Oyo state was being cleaned and that another era has come up; a new era of peace and respect for the citizens,” Abatan stated .

He thanked the Governor for an order that salaries and pensions should not be paid in percentages again but fully on the 25th day of every month, a day now named the Governor Seyi Makinde’s (GSM’s) day.

Amidst continuous applause by pensioners and others who graced the event, Comrade Abatan further praised Makinde who within his 100days in office  has paid N1.5 Billion (equivalent to US$ 4,143,646.41) to settle part of the outstanding pensions of retired Primary School Teachers which he said; “some others could not pay in 8 years.” He pledge NUP’s cooperation with the administration of Makinde and further assured the Governor that the Radio Station will not be used to run down his Government and that the station will adhere to the National Broadcasting Council’s regulations.

He joined other speakers to request Oyo and other Governments to patronize their facilities and radio services.

Painfully, Abatan disclosed to the Governor that pensioners who retired 20 years ago earn less than Ten Thousands Naira each month. He therefore earnestly requested the Governor to help all pensioners by addressing certain eight points’ issues including parity of old pensions with the current pensions and liquidation of outstanding pensions of both Local Government and Primary school teachers.

Governor Makinde who was represented by his Deputy Chief of Staff; Hon Mojeed Olawale Mogbojunbola pointed out that NUP’s invitation did not reach them. He politely apologized for Governor’s inability to personally attend the day’s event owing to other pressing State security matters.

In his opening remark, Hon. Mogbonjubola said, “ I used to think that the the State Government has this edifice but surprises me that the NUP has it. As an Architect who knows the value of work done, I like to say that it is a great achievement by the NUP.” He promised to covey happenings of the day’s event to the Governor. Concerning the eight major requests made by state NUP, he expressed the need for both the Government and NUP to have a committee who will work out modalities for resolving the issues.

Pensioners from many States came in large buses to attend the Radio Commissioning ceremony.