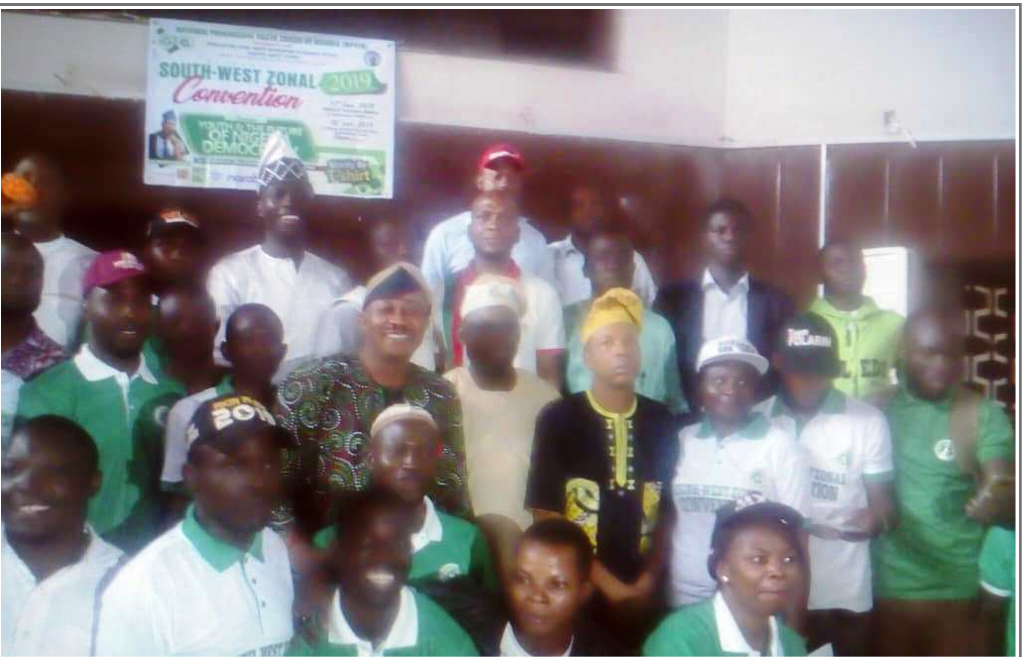 NPYFN: Youths that Lag are either in Wrong Environment or …, says Prof. Adekunle.
By: Ademola Oladele.
The guests were seated, youth were present in substantial number, the enthusiasm of the youths were palpable as the South-West Zonal Convention of National Progressive Youth Forum of Nigeria (NPYFN) held at the House of Chiefs, Oyo State Secretariat, Ibadan took off. The theme of the convention was; Youth and Future of Nigeria Democracy.

The guest speaker at the event Professor Segun Adekunle; the Senior Adviser to Oyo State Government on Agriculture said Nigerian youth are not destined to be political tug but they are to supposed to be in charge of the political offices. He cautioned every youth to stop petty thinking. They should stop exhausting their strengths, wit and abilities over pointless issues when they can be empowered in taking essential part in governance in order to bring forth modern structural development in Nigeria. He added that those who faced colonial masters and claimed Nigerian independence from them were youths, most of who were less than 40 years in age.
He further stated that getting it right as a youth for the future of the Nigerian Democracy requires planned effort. He regarded this day’s event as an eye opener that could serve as a guide for youths that are interested in good governance. As youth you not must hesitate to re-plan your motives if necessary to avoid wastages of your precious time and future because experience has shown over time that when the future is not well planned, needs are not fully met as setting priorities enables individuals and groups to address and achieve crucial plans, he added. Recourses received from God such as strength, wisdom and talent can be effectively deployed to achieve better future in Nigerian Democracy, the Professor further said. If waste is eliminated as much as possible, set plans will be easy to achieve, he thus encouraged the youths to plan their future effectively.
He continued that many of the youths are not where they are supposed to be. By now, most of the youths are supposed to be in advanced level of aspiration to be Governor, Senators, President, Directors etc. if Gowon can became Nigerian military President by the age of 29 years it means you too can run the affairs of the country, Professor Adekunle opined. He advised youths that instead of pursuing petty money, it was high time they pursued better position in the society. He reminded the gathering of what the first sets of youths that obtained independence did. The youths created first Radio and Television Station; Cocoa House was their innovation; Research Institutions across the Nation; first University in Ibadan; good and quality roads and they achieved all these at their youthful age not when they became 70 years, he revealed.
Professor Adekunle admonished Youths to stop begging but to think of creating something tangible that will last like we all enjoyed Chief Obafemi Awolowo constructions. He further advised youths to have deeper understanding and comprehensive knowledge to create new Nigeria by mingling with adult that will give rooms for freedom of expression. If you as a youth are brilliant but you still lag behind, that means you are dealing with wrong people. For effective result listen to your leaders, be organized, stop fighting your leaders and keep your ego. People like Bola Ige, Lateef Jakande, Olabisi Onabanjo, Adekunle Ajasin and Ambrose Ali, listened to their leader; Chief Obafemi Awolowo and that was why they can bring a lot of development to South-West region. It is indisputable that God has given youths selected talents but it is advisable to use all these qualities to assist leaders to build better future. More so, learn how to govern through this process and don’t be distracted with little money.
The blunt spoken Professor assured the youths that the future of Nigerian Democracy lies on them and therefore requested them to open their brains because there are much potential in youths which are not put to use. There are lots of opportunities which youths are missing in the society from time to time. There is no cheap money, you will work for it, yet we are in a time when one source of income is no longer sufficient to cater for personal and family needs, so, be focused and be courageous you will surely get to the next and better level, he further advised.
Meanwhile, Governor of Ogun State, Senator Ibikunle Amosun who was ably represented told the youth gathering that whether APM or All Progressive Congress (APC) no longer have differences in Ogun State. He said this while being represented by Honourable Kayode Odenike during the South-West Zonal Convention of National Progressive Youth Forum of Nigeria held at the House of Chiefs, Oyo State Secretariat Ibadan.
Governor Amosun acknowledged little differences that occurred during the primaries, but assured that they would settle their differences either before or after the Governorship and House of Assemblies elections. He strongly stated that come February 16, the APC Presidential candidate will be re-elected.
Other activities that came up during the program are recognition and presentation of certificates to the new Elected Executive Members of the forum; Launching of Endowment Fund; Swearing in the Zonal and States Executives Council in South West Zone and presentations of awards.
Recognition and presentation of certificates to the new Elected Executive Members of the forum was conducted by the Forum National President Comrade Balogun Abiodun Azeez. Comrade Azeez utilized this opportunity to congratulate all the new executives and all member for their vigorous effort which has steered the forum to the 3rd position on the President Mohammed Buhari campaign directory. He cautioned them to maintain this distinction so that the future of Nigerian Democracy will boom. The New Chairmen for South-West Zone are Comrade Teslim Kunle – Oyo State, Comrade Olayinka Fatoyinbo – Ogun State, Comrade Adesina Wasiu – Osun State, Comrade Awolokun Saka – Ekiti State, Comrade Temitope Eniafe Vincent – Ondo State and Comrade Olayera Segun – Lagos State.