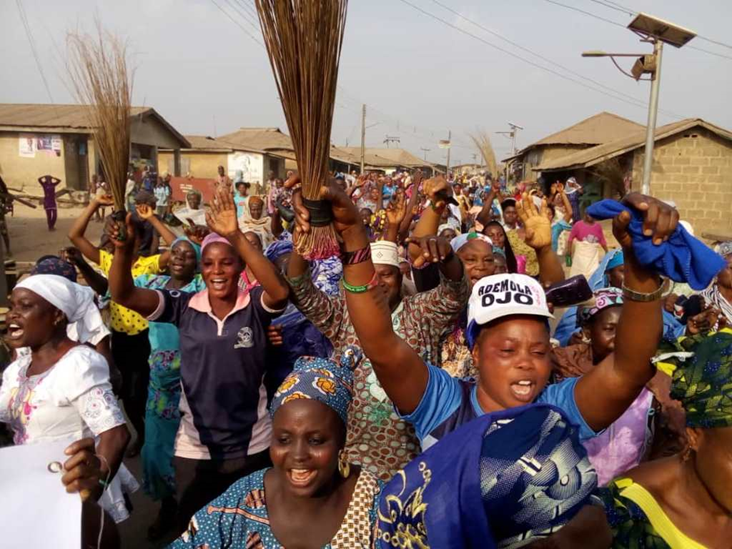 It will not be hyperbolic to say that the opposition political parties in Ibarapa Central LGA are increasingly coming under intense pressure with the rising waves of the All Progressives Congress (APC) in the local government. Few weeks to the presidential election, the Ibarapa Central APC held series of ward rallies with the population of APC supporters at each rally estimated at more than Nine Thousands and Five Hundred . The figure, some say, outnumbers the state campaign of some opposition parties held in the Local Government area.

Friday, 19th January, 2019 will continue to be memorable in Ibarapa Central as APC held carnival-like ward rallies with ecstasy and funfair. The rallies were held as scheduled in the two geopolitical blocs in Igboora (blocs one and two) with meeting-points as Methodist Primary School, Oke-Agogo, Igboora and Oke-Iserin roundabout, Igboora.

At the venue, Hon. Ademola Obafemi Ojo, the APC candidate for Ibarapa Central\North Federal constituency relayed the many achievements of the APC led government, both at federal, state and local levels, into the hearing of all. He went ahead to inform the gathering that a vote for APC in the forthcoming general elections is a vote for continuity of good governance; and a vote for any other party is a waste of time.

In his remark, a veteran politician, APC party leader in the zone; Alhaji Olaide Moshood Abas cleared the air on misinformation about bloc-voting; he emphasized the need to shun politics of sentiments. He also told the rally about the rationale behind the choice of the incumbent governor of Oyo state, Senator Isiaq Abiola Ajimobi as APC candidate for Oyo South Senatorial District in the 2019 general elections. He said Ajimobi will credibly represent Yoruba interest in 2023; and that Ajimobi was even persuaded to accept the offer.

After leaving the venue, the crowd walked through the Central Mosque, Igboora, to Igboora market (oja Igboora), and later to Oke-Iserin roundabout where APC members from wards eight, nine and ten had converged to welcome their fellow APC members.

For Hon. Ademola Obafemi Ojo who hails from ward nine, Oke-Iserin, Igboora, it was a welcome party as he became the cynosure of all eyes with many party faithful singing and dancing, and at a stage the crowd became uncontrollable because of the massive turnout. In his words, Hon. Ademola Ojo gave reasons why he should be voted in the general election as a Federal Honourable. He regarded the number of years spent by PDP at the helms of affairs as a waste. While rolling out the names of APC Candidates in the next general elections, he affirmed the earlier statement by Alhaji Olaide Abas with regard to the choice of Governor Ajimobi as a senatorial candidate.

In his closing remark,  Alh. O.M. Abas gave strong reasons to justify the choice of Hon. Ademola Obafemi Ojo and other APC candidates, and the need for APC to win it all in the next general elections.

After the event Alhaji Abas took time off to attend to questions from reporters.