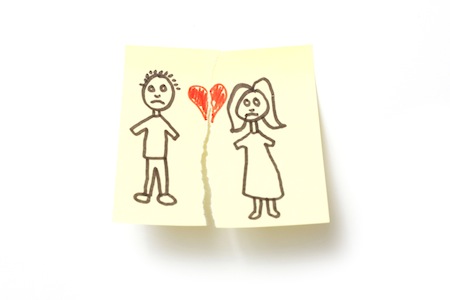 Mrs.Taiwo Agboola, an hairdresser has applied in Court to dissolve the marriage between her and her husband Mr. Sule Agboola on four grounds of complaint against her husband. The Customary Court Holden at Mapo area of Ibadan heard that Sule was a trouble maker, a situation that wife said threaten her life. The court also heard that her husband was not caring, not responsible and was used to beating her. The Court also heard that Sule was a jealous kind, who doesn’t trust her for a moment more that the marriage was yet to be blessed with child. Taiwo prayed the court that if her plea was granted and the marriage eventually dissolved, wherever she is staying, Sule Agboola would no longer be disturbing her.

In a surprise response, the husband Mr. Sule Agboola who was present in court agreed that the Court could dissolve the 4 years childless marriage between him and Taiwo and he fervently promised not get near or disturb her after the disengagement.

However Sule, an Electrician disclosed that he stays at Iyanna Grammar Area of Ibadan, Nigeria and that he got married to an hypocrite. Sule alleged that Taiwo was unfaithful to the extent that if she said she was going to Boluwatife, she will be found at Apete. She is a good lair. He added that he has set eyes on Taiwo Agboola since March 23rd, 2017 because she had left his house since that date and the court letter was served him through its registrar.

Sule further alleged that her wife was an ungrateful person, because he did everything in his capacity to please his wife yet she was not satisfied. He disclosed that they were leaving together in a 3-bedroom apartment where he provided everything needed such as food, clothing, beverages provision, modern home appliances in order to satisfy her and make life comfortable yet she was not satisfied. He also said his wife is a rude, abusive and ill-mannered wife such that if he said a word, she would reply with four words. He added that it got a point, if he asked her to perform her duty to as wife i.e to make love together she disallowed. He said he begged her severally to play her role as a wife, still she resisted. He added that when he tried all possible means to persuade her and there was no change in her behaviour, he arranged for people to plead to her on his behalf to explore if he had offended her, yet she did not make any complaint and does not allow him to make love to her.

Mr. Sule Agboola narrated further that sometimes Taiwo will be crying when it comes to making love, sometimes she would run out of the apartment. Later, when he tried everything without success, he indirectly sought for advice from elderly people both male and female and he was told that if a married woman is acting in such manner, there is possibility that such woman has been sleeping around with another man or men that are giving her comfort and satisfaction or maybe she has become lesbians of which both possibilities are very dangerous to the husband of such woman. Still, Sule said he didn’t change good behavior to his wife until she eventually packed all her belongings on the 23rd of March, 2017 out of his house.

The husband told the court that he tried all his best to maintain communication with his wife but all efforts failed and that was why he lost hope and trust in his wife and agreed that the Court could dissolve the 4 years childless marriage between him and Taiwo. Besides, he told the court that he has never touched the remaining belongings of Taiwo and if she desires to pick it immediately after the court session, she could do so because he has nothing to do with her anymore, Sule concluded.

The Customary court President, Chief Ademola Odunade did not hesitate to dissolve the 4 years old marriage and asked both parties to be going on their own ways as they consented. He finally ordered Mrs. Taiwo Agboola to pack her remaining belongings peacefully soonest.