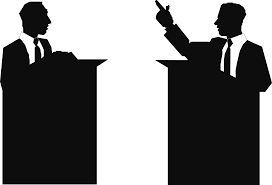 The 2019 General elections is generating excitement with marketing of abilities of candidates and their political parties at all levels of contest and in all places across Nigeria. Oyo State consists of five distinct divisions such as Ibadan, Okeogun, Ogbomoso, Oyo and Ibarapa.

In Ibarapa geo-political division of Oyo State, some group of vibrant youths under the name; Better Ibarapa Initiative (BII) is organizing an all-out debate known as ‘Ibarapa Candidates’ Debate’ to give opportunities to various candidates contesting Federal House of Representatives and Oyo State House of Assembly elections Ibarapa Central / North Constituency to explain their ideas, thoughts, beliefs and plans for their constituency.

An updated press release made available to the PublicTimes and signed by the BII Organising Secretary stated that the debate still holds on Wednesday 2nd day of January by 10 a.m.

However the venue of the debate has been rescheduled to hold at Adegoke Nursery/Primary School Hall, Igboora instead of the 800 capacity Lecture Theater of Oyo State College of Agriculture and Technology (OYSCATECH) Igbo-ora that was formerly planned.

In a chat with BII organising secretary; Femi Adesope, it was gathered that the change of venue was due to a reply letter received from the Registrar of Oyo State College of Agriculture and Technology, Igboora that the venue which the group sought to use had been booked for another event on same day. The organising secretary also confirmed that the candidates are not worried about the change of venue.

The sudden change of venue necessitated reprint of fresh letters to reflect the new venue and this means a fresh redistribution of invitation letters to major stake holders across the constituency with target completion by Monday 31st December 2018 ahead of the day of debate, Adesope said. To facilitate this, text messages have been sent ahead to participants and major stakeholders ahead of their fresh letters, the team’s organising secretary explained.

The release further stated that the organizers have so far invited 14 candidates for both the Federal House Representatives and of Oyo State House of Assembly from political parties that include; AAC, ADC, ADP, APC, ANN, PDP, SDP and ZLP.

Security agencies in both Ibarapa Central and North Local Governments have been duly informed and have shown commitment to attend.

Also, they have secured two credible moderators and both were reported to have assured the organizers of high level of their commitment.

Better Ibarapa Initiative has also secured photo and video coverage towards the debate.

In addition, the organizers will perform street to street publicity campaign round the towns within the Constituency as from Sunday, 30th December, 2018, while members of the forum have volunteered to run Facebook advert of the debate till the debate would be over.

They have secured 60 seconds airtime with Petals FM 102.3, Radio Station Ibadan holding during its programs of Monday 31st December between 5 a.m. and 6.20am.

Live streaming of the debate is being explored and perfected, Adesope added in the release.

In addition Bettter Ibarapa Initiative has developed Audience Rules of Engagement in order to minimize distractions and to promote proper audience involvement in the debate. Candidates will be allowed to co-mingle both Yoruba and English languages during the debate.

They group called for suggestion or question and support from all and sundry. With the painstaking planning and commitment of the organizers, a flurry of questions should be expected at the debate as the group look forward for large attendance at the debate on 2nd January, 2019 by 10.a.m at Adegoke Nursery/Primary School, Igboora.