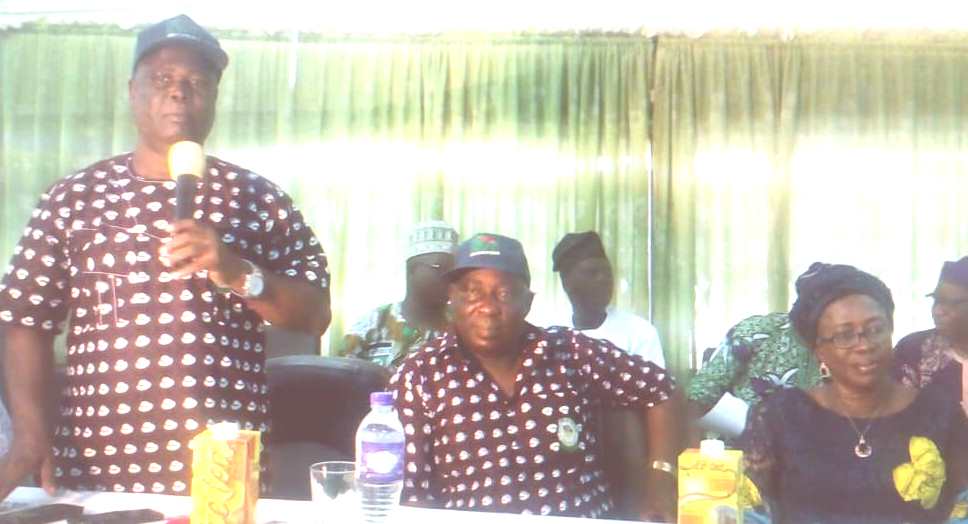 Governments at all tiers as well as other stakeholders in Education Industry in Nigeria have been called to rise promptly to the rescue of the Industry by providing the necessary resources to support Teachers Registration Council of Nigeria (TRCN) in order to forestall recruitment of unqualified teachers in the nation’s education system. This call was made by the State Chairman, Nigerian  Union of Teachers – N.U.T. Oyo State Wing – Comrade (Prince) Adedoyin Samuel on the occasion of 2018 world Teachers’ Day held at the Teachers’ House, Oluyole Estate, Ibadan.

The annual Teachers’ day Anniversary commemorates the day that Teachers’ celebration was approved by the United Nations (UN) following the recommendation of the ILO/UNESCO in 1966 concerning the status of teachers. The theme for this year Teachers’ day is “The Right to Education means The Right to a Qualified Teacher”. Comrade Adedoyin stressed that education is a constitutional right of every child as stated by the United Nations Education, Scientific and Cultural Organization (UNESCO) and enshrined in the Nigerian Universal Basic Education Law.

He further stated that education all over the world remains an investment for the future of individuals and societies. The importance of education is more widely recognized today than ever before because teachers who are to play the central role in providing quality education all over the world must be competent and qualified. Comrade Adedoyin used the World Teachers’ Day celebration to re-emphasis that no nation can develop greater than the quality of her teachers and that teachers deserve appropriate recognition, remuneration and rewards corresponding to their services.

Comrade Adedoyin appealed for reinstatement of a good number of their teacher-members who were involved in one allegation or the other but have been cleared of those allegations by various committees of government.

And as UNESCO recognized the status of the teachers all over world and had prescribed that the budgetary provision of Nations should provide not less than 26% of the total Budget Allocation to education sector, Comrade Olojede urged Nigerian governments at all levels to ensure strict compliance by giving not less than 26% of each year’s budgetary allocation to education. He said Nigeria is a signatory to the declaration but lamented that when Nigerian governments give as low as 8%, 7%, 11%, they come out to make announcement, that the allocation that goes to Education is a lion share.

He also appealed to other stakeholders that where government played her own role by providing structures and instructional materials; parents, religious organizations and philanthropists should complement since education should remain the responsibility of all because the benefits of education will go to everybody.

Comrade Olojede added that the impression of this year Theme is to make it clear to the whole world that the time has come for quacks to leave the classrooms. The era of all comers to Teaching will soon go because there is on ground Teachers Registration Council of Nigeria that will be regulating the activities of teachers in terms of competence, conduct and professionalism.

Even at the level of Jamb, N.U.T. is pressing that cut off marks for admission of any candidate wanting to read education should be raised up in order to get rid of half-baked teachers because where a teacher commits an error the whole generation is doomed and that is why attention must be given to education and off course to our teachers. He finally demanded on behalf of all N.U.T. that Nigerian government should raise the retirement stage of teachers to 65 years and the old Teachers Training Colleges that have been scrapped should be restored because one can’t compare a teacher who went through Teacher Training Colleges of the old with the current teachers we have. Those old teachers are well grounded, they passed through the rudiments of the training as teachers in terms of discipline but now they are gradually moving out of the system.

As leaders of teachers, Comrade Olojede assured teachers in Oyo State that the Union members will continue to do their best in pressing, negotiating and holding consultation on the needs to improve the education system. There is need to take adequate care of the welfare of the teachers and to give incentives that can boost the morale of the teachers, he concluded.

In her speech, the Chairman SUPEB Oyo State Mrs. Aderonke Makanjuola expressed her joy to felicitate and be identified with the teachers. She charged teachers to be proactive and to work hard to be productive in their profession. She told the gathering that the issue of primary school teachers’ promotion is no longer a promise because it has been done. She said Oyo State Government has approved the promotion of all primary school teachers effective from 2011 and by Monday 8th of October, 2018 SUPEB will be rolling out the promotion letter so that the beneficiary will have their letters of promotion.

In a telephone interview with the immediate past Chairman of NUT Oyo State wing – Com Niyi Akano on Wednesday 10th October, 2018 to check the status of receipts of promotion letters by the teachers, the former N.U.T chairman confirmed that Teachers have been receiving their promotion letters.