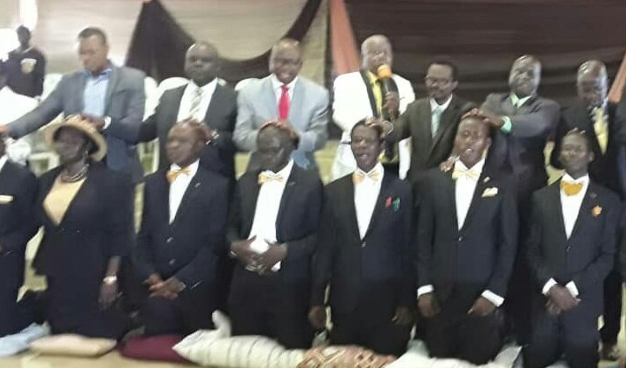 In an exclusive interview with PublicTimes correspondent, it was revealed that Ibadan Baptist Conference has an Education Minister in Reverend Sunday Olagoke Okunlola who co-ordinated the Ordination event.

Ordain them to become Reverends under the Nigerian Baptist Convention.
Reverend Okunlola explained that the offices of the Pastor and deacon are recognized by the Convention. Pastor is an office. When a Pastor finishes his training, the Convention will sanctify him for duty but there are special responsibilities a Pastor cannot do until he or she is ordained. He further clarified that ordination gives such Pastor the recognition of being a full time cleric under the Convention.

By Baptist Convention policy, an ordained Pastor can represent the Convention at any level, has privileges to administer the two ordinances of the local church such as Baptism and the Lord’s Supper as well as privileges to join couples in marriages. And these roles justify the commissioning of Pastors into service of recognition and affirmation.

Rev. Okunlola lamented that during the process that led to the selection of candidates, some local churches recommended ineligible Pastors to the Conference. The Conference had to screen and analyze documents submitted by candidates in order to identify those that are qualified. In addition, some pastors qualified but the church did not select them. Yet if the church failed in their responsibility, it may affect the Pastor. Finance and cooperation of the Pastors were also challenges.

The Minister charged the ordained Reverends to flee from anything that will drag their names and their masters into mud. He urged them to live above board, and remember what they have been taught during their orientation seminar / workshop. He told the church to stand out of corruption and influence the society positively because happenings these days in the church are not palatable at all, corruption is also in the church, the Minister lamented. He observed that the Church found it difficult to blame politicians because the church itself is not doing things that are to be done. If there is any moral decay in the society, the church should be blamed because it is supposed to be the light of the world as projected in the bible, he said. Church should propagate the gospel and be the mouth-piece for the oppressed. The issue of standing for truth should be the priority of the church; not money, position or fame, he further urged.

Reverend Okunlola also viewed security as the responsibility of everybody which everyone and that Nigerians should not leave everything for the security agencies alone although security agencies must rise up to their responsibilities. He also charged government too to provide the necessary equipment, gadget and resources needed to fulfill this arduous task.

One of the ordained pastors, 47, now Reverend Kolade Ali Oluwasomidotun Zacheus who serves both Global Missions Board, Nigerian Baptist Convention, Total Garden, Ibadan and Faith Baptist Church Old Ife Road, Saw Mill, Ibadan applauded his church members, Association, Conference, Convention and every individual who aided his journey to become a Reverend. He narrated that he got to the level of the ordination after he went to Baptist Theology Seminary Ogbomoso from the year 2012 – 2015 with the certificate of the Master of Divinity in Religious Education and had served minimum of 2 years before he applied and was found fit to become a Reverend.