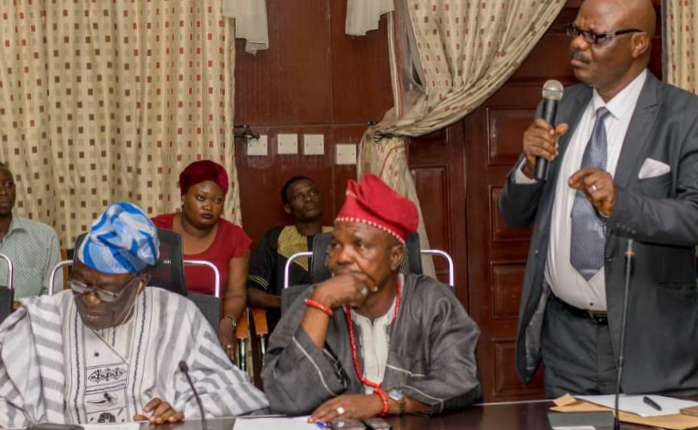 Rt. Hon. Ojo expressed deep concern over the plight of Pensioners across the country and this has prompted Oyo State Assembly’s effort at quickly addressing the problem through legislative frame work and this he assured should enhance pensioners’ welfare.

At the occasion, the Speaker informed the state pensioners about the efforts of Governor Abiola Ajimobi who is doing his best to ameliorate the sufferings of pensioners and civil servants in the state. The Speaker charged the senior citizens to support the All Progressives Congress administration in its determination to change the negative narratives about the Nigerian polity.

Earlier, the State Chairman, Nigerian Union of Pensioners, Pa Gbadegesin Akande and Secretary, Comrade Olusegun Abatan praised the State House of Assembly for showing concern for the plights of Pensioners in the State. The Union leaders called on the Legislators not to relent in enacting laws that will put smiles on Pensioners faces; especially the bill on Pensions that is already before the House.

Meanwhile, Oyo State Government on Monday 23rd July 2018 released a sum N201.58 million to another set of 90 retirees for the payment of gratuities of years 2011 and 2012 for Civil Servants and Teachers across all cadres in the State. During the payment the Head of Service appeal to pensioners who are yet to receive theirs not to lose hope because Government is making great efforts to ensure their payment too.

The State Government had similarly released a sum of N200.96 million in May 2018 for payment of years 2011, 2012 for gratuities of retirees on grade levels 01-07.
But in an exclusive interview by the publictimes an online newspaper, the Secretary, Nigerian Union of Pensioners Oyo State; Comrade Olusegun Abatan clarified that a suit which the Union had instituted at the Industrial Court, Adeoyo, Ring Road Area, Ibadan against the State Government had to do with unpaid gratuities and pensions of retired Primary Schools Teachers and Local Government pensioners and the next date of adjournment at the Court is on 24th October, 2018.

The NUP Secretary further lamented that if the amount owed the said Pensioners is to be calculated, it adds up to about N42.3 Billion for the period between May 2011 and December 2017. He further said that if the unpaid gratuities and pensions from June 2017 to June 2018 are added, the Pensioners would have been owed for more months.