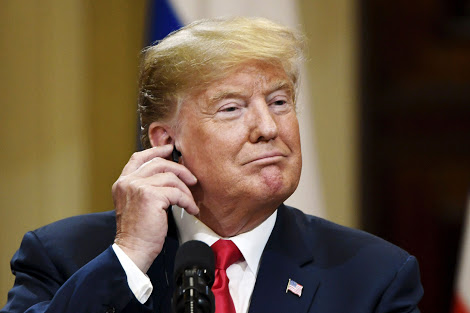 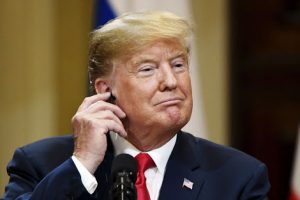 Amidst the historical background of western criticisms of socialist and communist nations repression of their press, the west may have been cleverly hit back going by the detailed reportage given to President Trump unending fight against ‘Fake news’.

The news of Trump’s continued fight against fake new was detailed in Russia Today news tweet. Trump, the President of U.S. by virtue of his position is the mirror by which the world views and measures the United States.

In what is believed to be an effort to cleverly mock Trump’s perception of ‘fake news’ and to point to the hypocritical claim of America as the bastion of free press in the supposedly free world where the world leader is currently enthusing her press on what and how they should ask, see, or write and behaving in such manner of publicly indirectly detesting the freedom of the press to ask, to see and to say what they found. The Russian newspaper revealed that; “US President Donald Trump lashed out at ‘fake news’ during his joint press conference with UK Prime Minister, Theresa May, singling out NBC and denying the CNN correspondent a question.”

During the incident, Trump allegedly snubbed; ‘No, you’re fake news’ as NBC’s White House correspondent Kristen Welker asked a question about NATO preparatory to Putin-Trump summit in Helsinki, Finland believably because he wanted to preempt Welker’s question which might be helpful to the Russian cause.

In addition, the news narrated how President Trump cited his decision to expel 60 Russian diplomats as a favor he did to Britain on the issue of alleged nerve agent attack in Salisbury in March, an action that Trump said was tough enough to attract mainstream press notice but which did not because “the fake news doesn’t want to talk about it.”

Beside the American press, Trump also castigated the Sun British news reporters for not publishing his sweet praise he had heaped on his host when he said; “I said very good things about her (i.e. Prime Minister May). I didn’t think they’d put it in, but that’s alright. They didn’t put it in the headline, I wish they’d put it in the headline. And she’s a total professional because when I saw her this morning I said; I want to apologize because I said such good things about you, and she said, don’t worry it’s only the press.”

Even at the conclusion of the 2018 Helsinki Putin-Trump summit today – Tuesday, Mr. Trump had this to say in a tweet; “while I had a great meeting with NATO, raising vast amounts of money, I had an even better meeting with Vladimir Putin of Russia. Sadly, it is not being reported that way – the Fake News is going Crazy!”

In all, Mr. Trump appears to be driving for nationalistic press for America and this he does without minding some of his off-cuff remarks that could bungle his  efforts in that direction.

It will be recalled that the United States had always accused China, Russia and some other Asia and Far East Countries of clamping down on free press in their countries.