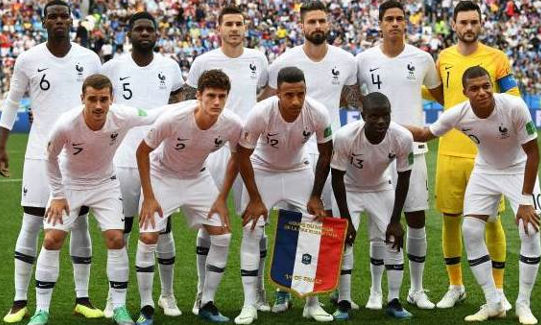 Humanity by its nature is competitive in wants, in aggression and in love. After engaging in many destructive wars in the past, men have come to realize the need to replace wars with something more tolerable, useful and civilized. The replacement has not been totally achieved because there are still wars among men; they have to some extent achieved the transfer of some of their destructive energy of wars into positive use as sports. Men have remodeled wars into wears – fashionable things / entertainment, hence the Olympic Games, World Cup Competition, World Boxing Tournaments, World Regions’ Sports Competitions and so on.

This piece is about 2018 World Football Cup Competition currently holding in Russia and tagged “Russia 2018 FIFA World Cup,” the final of which is to be played between two football giants in the next few days.

The French mid- fielder and the Manchester United Super Star – Paul Pogba and his teammates will finally meet the technically terrifying team; the Blazers of Croatia in the final match of the ongoing Russia 2018 FIFA World Cup. At the preliminary stage of the competition where 32 different teams were struggling to catch the same trophy, the French team found herself in Group C of the tournament with other 3 teams of Switzerland, Peru Team and Denmark.

At the third game of the French side which was their last game of the preliminary stage, the French drew with the Danish Dynamite by 1-1. This result made the French team to come out first from group C and gave them the ticket to the elimination stage of the competition. People still don’t see what I have seen in this French team.

Immediately the French team got to the elimination series of the competition the round of sixteens’ precisely, Paul Pogba of the French team told the world before his team met the White and Blue Sky of Argentina that he believed the Blues of France can technically beat Argentina’s team despite the fact that the White and Blue Sky of Argentina possesses world class stars like Lionel Messi of Barcelona; Kuan Arguero of Manchester City; Di- Maria from PSG; Paulo Dybala from Juventus amongst others.

Eventually at the second round stage Pogba forecast came to pass when the French team technically or (do I say chemically too) dissolved the hard salts of White and Blue sky of Argentines by beating them 4 goals to 3 goals. Many football observers still believe that this French team is not superb enough and that it was just the Argentines team that had in-house issues which made the French team triumphed over them.

The French side proceeded to defeat “La Celeste” meaning the Sky Blue One of Uruguay, the most disciplined team of the tournament by 2-0 at the Quarter Final of the competition. After their win, some football lovers argued that French victory happened because the main striker of the Sky Blue One of Uruguay Edison Cavani was not in that game because of his calf injury. But many forget that one of the French Mid- fielder and Juventus Super Star Blaise Matuide was not in that game too, yet France triumphed.

Interestingly, at the semifinal, the French team became fearsome when the Blues of France stopped the Red Devils of Belgium. The Belgium side happened to be the favorite of many football lovers because two years since losing 3-1 to Wales in the Quarter Final of the Euro 2016, Belgium had only lost one game, and that was a 2-0 reverse at the hands of Spain in a friendly at Brussels, courtesy of a David Silva brace in September 2016. Since then, they have gone 2-2 matches unbeaten. But at Krestovsky Stadium Saint Petersburg on Tuesday, the Red Devil’s cannot bedevil the Blues of France in the first Semi- final game played in the Russia 2018 World Cup.

Now people are beginning to see what my old man sitting under the tree have seen where the younger ones on the top of the tree can never see about the French team that makes them go as far as final stage of the 2018 FIFA World Tournament.

The second noticeable thing about this French team is that the team possesses the combination of Black and White people that are ready to die for the same cause, this makes the team so strong, powerful, energetic and fit to take on different opponents with different styles of formation.

The third thing point about the French is that this team is not built on a single player. The French team is a team where anybody can defend; anybody can play as mid-fielder; anybody can score. They played as one, they moved together from one side to other side of the pitch until the final whistle of the game, they blocked the opponents together and when it comes to attack, they fight in unison. Now they jubilate together after crossing different arduous and stormy seas and finally found their ways to the final stage of the 2018 FIFA World Cup in Russia together.

With all these qualities, can the Blues of France tame or quench the hotness of Blazers of Croatia in the final match of this surprising and shock-filled competition holding at Lushinki Stadium, Moscow Russia on the 15th of July 2018 by 4:00pm Nigerian time to become the World champion?

In conclusion, let’s relax and see what will likely be the outcome of this young, talented, energetic, harmonic, technical and solid French team in the final match of the 22nd edition of the FIFA World Cup competition. Over to football lovers, over to July 15, 2018 !!!