At University You Are On Your Own, Professor Oyawale tells … 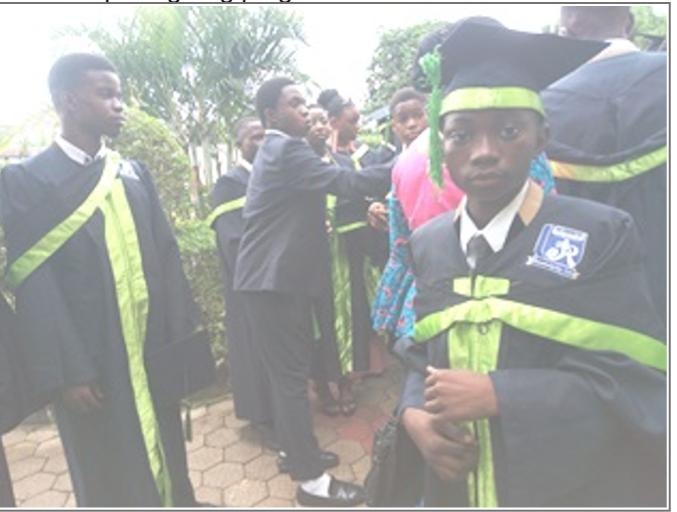 At University You Are On Your Own, Professor Oyawale tells …

A profound Scientist and Professor of Industrial and Manufacturing Engineering, Covenant University Ota, Ogun State – Professor Festus Adekunle Oyawale has charged students on factors of leadership, and remedy against prostitution and cultism. He spoke as the Guest Speaker for the Valedictory Service organized by RoseBud Schools for her graduating students. The event which was held at Akala Way, Akobo – Exide axis, Ibadan last Tuesday 3rd July 2018 was different from the usual end of session / prize giving program.

Against the background of cautionary note to hasty parents by the C.E.O. of RoseBud Schools – Engr. Kunle Aderogba, the Professor added to the C.E.O.’s admonition to hasty parents that if their wards were not ready for the higher class parents should not unduly hasten them. The children should move when they are ready and if any parents want to make them jump the queue or cut corners in order to move fast educationally, such parents should understand that what they gain by cutting corners they will lose at the round-about.

Oyawale, a profound Scientist told the audience that without education, a child cannot achieve his natural potential. He further told the outgoing students that they are at the point of the ladder to leadership position.
He urged the outgoing students to aspire to leadership positions in life. A leader, male or female is someone who commands a group, organization or community; Muhamadu Buhari is the leader of our country, the Principal is the leader of RoseBud School, daddy is the leader in the home, the Professor explained. Leaders are not made overnight and to be a leader one must be humble servant of the people; a leader must have level of confidence that engenders trust from his followers; a leader must inspire his followers by leading by good example, he added.

Your followers will look up to you as role model and if someone can successfully inspire the followers, you can easily overcome any challenges or resistance, he charged the out-going students. The professor quoted that a leader is someone who knows the way, goes the way and shows the way. All great leaders build up their achievement bit by bit until they take up those enormous challenges that they are famous of; great leaders also take a moment to celebrate before they move to their next challenge, he pointed out.

Professor Oyawale expressed his happiness for the achievements recorded by the outgoing students and remarked that their future is bright. He advised them that for the different endeavors that each of them yearn for, they should carefully select courses in line with their dreams, develop entrepreneurial skill and insist to do the course of their interest even if it would require extra study. He observed that life could be frustrating if one does not do the job of interest.

Also, he urged students to aspire to attain higher grade at the University because employers of labour do recruit persons of higher grades.
He quoted Winston Churchill that; success consists of going from failure to failure without loss of enthusiasm. He advised the students that life is a continuing education and that short courses add do value at meeting entrepreneurial aspiration. The moment you are comfortable you are not doing your best, but the moment you are facing challenges is the only time that you are moving on, he said.

He further told the audience that after university graduation they can go into any business and there is no limit to what they can achieve. He cited a list of young Nigerians in their thirties who have become billionaires in their field of endeavours.

The Professor told the Students and their parents that as their wards are going to the University, they are not coming to live in that home with their parents again. And by the grace of God they are gone for good, he said. The University is not like your secondary school; at the University you are responsible for your action and you should therefore

watch out against things like prostitution, drugs dependency and cult activities; all of which are destroyers of careers and bright future, the Professor warned.

Prostitution is sometimes called ‘Runs’ or ‘Aristole’. You should avoid them. You are going to meet a lot of them who are always ready to advice you, please don’t follow their advice, he said. For those of you that are good, they will call you name like; “mama so pe” i.e. “my mother has said”, or “my mother has instructed me”, please be in the “mama so pe” group, when they ask you to follow them out and you replied that “mama so pe kin ma jade” i.e. “my mother told me not go out”; follow your mother’s instruction and not the ‘Aristoles’ he said. Many of them are often from wealthy home and on drugs, do not idolize them or the drug addicts, drug destroy one’s future, the Professor counseled.

On cultism, the Guest Lecturer described it as another plague that destroys dreams. He asserted that many young persons succumbed to cults without knowing. He called on the graduating secondary school students that when they enter the University, they should avoid undeserved favours or free gifts, parties, outings and so on from individuals or groups because they use these as bait to lure students into their cult groups. The Professor advised the students to belong to campus faith groups because the cult members know that once you belong to a faith group, you can no longer be in their group.

Earlier the Chief Executive Officer of RoseBud Schools – Engr. ‘Kunle Aderogba admonished parents to allow their wards to grow gradually and avoid undue haste at pushing these children to heights they are unprepared for.

Also, the principal of the School Engr. Abiodun had told the audience about various medals won by their students. These include 1st overall position state-wide at Ajumose Debate and Quiz Competition 2017/18, 2nd overall position state-wide at Spelling Bee at Ajumose Spelling Bee competition 2017/18 and 1st position in essay competition on United Nations Development Goals organized by International Relations Department of Obafemi Awolowo University and sponsored by United Nations Information Centre, Lagos, to mention a few.

Many dignitaries, parent, students and relatives graced the event that was rich in wisdom, humor, dignity and ideals.