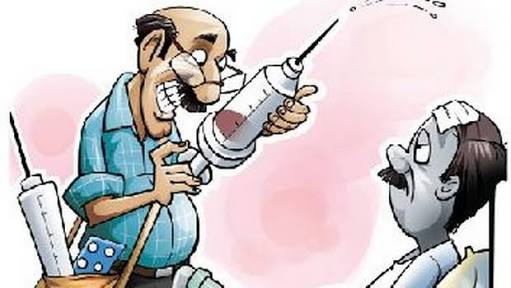 One day monkey will go to market, monkey will never return. If someone knows how to use deception as a means of surviving, a day will come when the person will be caught and the king that knows Joseph might not be on throne.

In Ibadan a 40 year old man, Chinedu Orizu Wisdom was arraigned before the Chief Magistrate Court Holding at Iwo Road, Ibadan over two count charge of impersonation and unlawfully possession.

The first count stated that Chinedu Orizu Wisdom on the 22nd of June 2018 at about 10.00 hrs at Ashiru Bashorun Ibadan in Ibadan less city Magisterial District was found with one Camry car ignition key, one Nissan car ignition key, 15 pieces of SIM cards, some mechanical equipment, four female passport photographs and ATM card of GT Bank with the bearer’s name – Deborah Baruwa, a female, which Chinedu failed to give reasonable account on each of of them and thereby committed an offence contrary to and punishable under section 430 of the criminal code Volume 2 laws of Oyo State Nigeria 2000.

The second count stated that Chinedu Orizu Wisdom on the aforementioned date, time and place in Ibadan less city Magisterial District did impersonate medical Doctor and armed himself with medical Doctor’s identity card that claimed to be a staff and medical Doctor of U C.H. Ibadan knowing same to be false and thereby committed an offence contrary to and punishable under section 108 of the criminal code cap 38 volume 2 laws of Oyo State Nigeria 2000.

Police ASP. S.O. Ogunremi told the court that Chinedu was initially brought to Ashi Police Station by one Mr. Sule AbduLateef. ASP. Ogunremi narrated that sometimes in May 2108 Chinedu contacted Mr. Sule Abdulateef to carry him from Ashi to Oranyan area and both agreed on N1,000.00 (US$2.7) for just one hour. Mr. Abdulateef alleged further that Mr Chinedu spent about 3 hours at Oranyan market before he returned. When Chinedu returned he did not buy anything and asked AbduLateef to take him back to Ashi. When they got to Ashi, Mr Abdulateef requested Mr. Chinedu to add more money to the N1,000.00 they had earlier agreed on but instead Mr. Chinedu ran into a compound and ran away without paying any money.

The prosecutor further stated that Mr. AbduLateef had since been searching for Mr. Chinedu until 21st day 2018 when he eventually saw him around Vine Store Area Ashi where Mr. AbduLateef held Mr. Chinedu and brought him to Ashi Police Station at Ashi, Ibadan through the help of one Pastor Alamu.

Prosecutor ASP Ogunremi claimed that when they got to the police station, Mr Chinedu was searched and different items like UCH Doctor’s identity card which he has been using to impersonate a medical practitioner was recovered from him. Also, a Camry car ignition key plus a Nissan car ignition key were also found on him. Different SIM cards and a female passport photograph were retrieved from him.

In his confession, Chinedu Orizu Wisdom told court that he has been duping people by claiming that he was a medical doctor which he has never been. Chinedu further stated that he has duped many people especially ladies with the two ignition car keys by flaunting the keys as if he has car but it was just cajole to obtain from people.

The accused person pleaded guilty to the two counts charge and promised that if the Chief Magistrate could have mercy on him he will not do such again. He concluded that a Redeemed church has promised to take him to Rehabilitation center and later buy him Okada, information that was confirmed by the prosecutor.

The Chief Magistrate Taiwo Olaniran ruled that Mr. Chinedu Orizu Wisdom was found guilty of the two counts charge before him after thorough investigation by the police officers. Due to Mr. Chinedu’s prayer and the prosecutor’s confirmation of Redeemed Church promise to rehabilitate the accused person being a first time offender the Chief Magistrate decided to be lenient with Chinedu.

Instead of jailing him for 3 years imprisonment for the offence of impersonation and 2 years of unlawful possession; Chinedu was ordered to serve 3 days on community service starting from the 3rd of July 2018 and lapses on the 5th of July 2018 and each service day will be 3 hours per day.

Finally, Chief Magistrate Taiwo Olaniran warned Mr. Chinedu to change for good as he promised, otherwise a day may come the Pharaoh that knows Joseph may not be on the throne forever and another pharaoh may come that will not know Joseph.