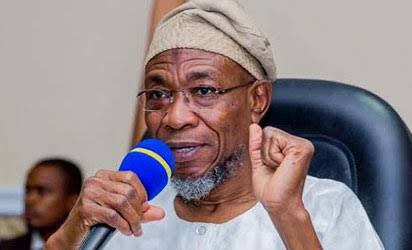 He urged the Civil Servants to re-engineer the Service and take the lead in ensuring that government build a humane, civilized and people oriented society. He recalled with appreciation that on two occasions he delayed constituting the State Executive Council for financial reasons and the civil servants filled the gap very well and showed uncommon understanding at confronting the financial challenges of the State.
In continuation of his Toast on the launch of the senior citizens’ book, Ogbeni Aregbesola quoted from Paul Rutman; the Age of Diminishing Expectations and said that a country’s ability to improve the standard of living over time depend almost entirely on its ability to raise its output per worker.

Aregbesola observed that given the quality of life in our country and the quality elsewhere that he has seen, he could safely assert that the nation is wretched; poor is an understatement.
He reasoned that we are wretched because relative to others we are not productive. He cited that Thailand, a 3rd world country by any standard produces 60 metric tons of cassava per hectare per year and are researching raising their yields to 120 metric tons per hectare per annum while Nigeria including the State of Osun is producing 20 metric tons. At this point, he asked are we competitive? He said once one is not competitive the person will be poor.
Ogbeni Aregbesola who was the Special Guest of Honour further lamented that ‘Our productivity as a people is the lowest in the world on everything, the only thing we have gained upper hand is procreation. “I don’t mean to be vulgar but a look at the rate of our population increase shows that Nigeria has one of the fastest growing populations in the world,” he said. Also, he forewarned that should we as a nation continue without seriously looking at birth control and improve our attitude to productivity, we might end up in long famine. He summarized that the point he was making was that we as a nation should take the issue of productivity very seriously and be circumspect on population control.
He concluded that regardless of what he had said about improving efficiency, he appreciated every second that the Almighty God has made possible for him to work with people like the civil servants of the State of Osun. Mr. Governor as he is usually called went back to Abuja immediately after the Program that ended at 4.15p.m.
Some of the issues raised in the Governor’s toast bring to fore the question of where lies the fulcrum of power to improve a society when a Governor’s desire to fast-move his state could not be fast.
Other donors for the Book launch were Chief Bisi Akande, ALGON State of Osun, Osun Head of Civil Service, Associations of Retired Heads of Service and Permanent Secretaries from Lagos, Ogun, Oyo and Ondo States chapters among others numerous to mention.
It might interest our readers to know that an on-the-spot account revealed that the book launch attracted a total donation of more than Six Million Naira.