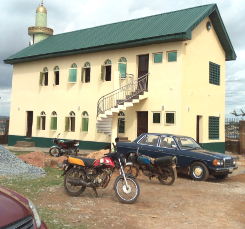 A new Jumat Mosque opened for Muslim worshippers at Elebu Road Junction of New Garage/Bembo Apata Express way, Ibadan on Friday 4th May 2018. The new Masjid was filled to its capacity as worshippers spilled over to its surroundings to hold their prayers session.
In an interview with one of the Imams of the new Masjid, Architect (Alhaj) Abdul Samad Akinlabi said the mosque is called Al-Imam Da’ud Central Mosque / Dawah Centre.
The mosque was built by Alhaji Abdul Ganniyu Akinlabi, a retired professional Town Planner whose father; Sheikh Al-Imam Da’ud Akinlabi, was an Islamic cleric, Imam and Purist at Igbo-ora before he passed on some two decades ago.