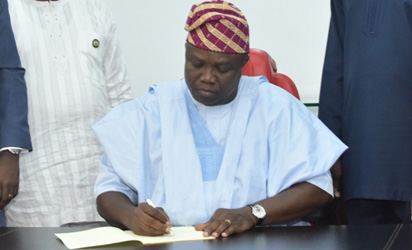 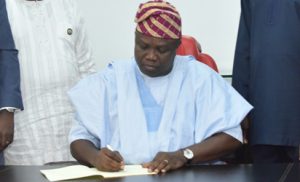 Amidst Court ruling on the limitation of the Economic and Financial Crimes Commission’s power to inquire into the Finances of States Government without an invitation from the States Houses of Assembly, the acting Chairman of the Economic and Financial Crimes Commission, EFCC, Mr. Ibrahim Magu has commended the Lagos State Judiciary for setting the pace in the establishment of special courts.

In a tweet released by the Media and Publicity Department of the EFCC, Mr. Magu made the commendation after the commissioning of Lagos State Special and Sexual Offences Courts held at Roseline Omotoso CourtHouse, Ikeja Lagos. The anti-graft Chief warned that “corruption will be fought like never before this year” and that corrupt people should be weary of the long arm the law, the release reported.

The establishment of the Special courts has keyed into fulfilling the desire of the anti-graft Agency – EFCC to speedily fight corruption in Nigeria through lawful means, Mr. Magu therefore urged “other States of the Federation to toe the same line as directed by the Chief Justice of the Federation, Hon. Justice Walter Onnoghen.”

In addition, he sought the support of journalists in his agency’s effort to fight against corruption and that this should not necessarily be by EFCC approach but by using journalists’ methods of public education, information and communication to campaign against corruption in our society. At the time of filing this report, it is not whether bodies like the EFCC, ICPC will have prosecutor access to these special state’s courts.

During her welcome address, the Chief Judge of Lagos State, Hon. Justice Opeyemi Oke expressed satisfaction at the large turn-out of invited guests as she further said; “we believe strongly that the special courts shall fast-track the trial of economic and financial cases and encourage the EFCC and other relevant bodies like ICPC to expedite the investigation and prosecution of such cases.”

“The bulk of over 500 cases of financial crimes pending before the High Court had now been assigned to the special offences courts,” she continued. The State Chief Judge also assured that Judiciary under her have commenced a campaign against corruption in the state’s courts and among supporting staff.

Beside the presence of the wife of the Governor – Mrs Bolanle Ambode, also present at the commissioning was the wife of the vice President, Mrs. Oludolapo Osinbajo who commended the “bold step” to set up the special courts and expressed her satisfaction to be part of the historic event.

The State Deputy Governor, Dr. Idiat Oluranti Adebule on behalf of the Lagos Governor cut the tape to commission the Courts.

With the availability of these Courts, the Laboratory to accurately ascertain the crime with the criminal and the officials to harness the outcome of investigations, Lagos State is far prepared, more than any other Government in Nigeria, to tackle sexual and other special crime offences, the PublicTimes can authoritatively confirm.