Tourism: Passion-4 Band in the storm of 2017 Calabar Carnival 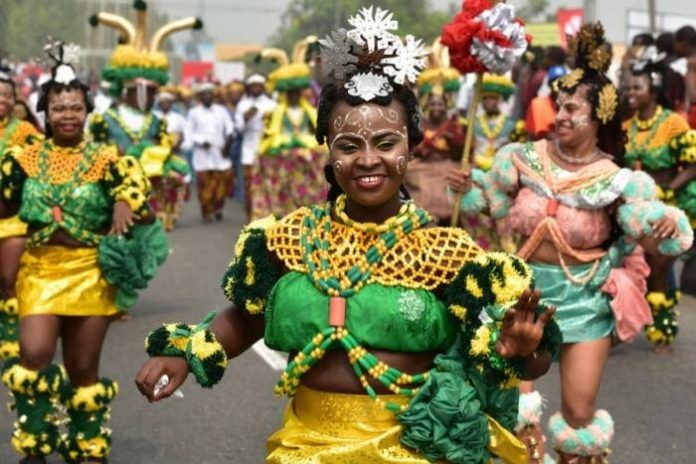 Tourism: Passion-4 Band in the storm of 2017 Calabar Carnival

Tourism is increasingly becoming a source of significant income generating item of some countries. Tourism as economics means the attraction of non-resident of a place to a particular residence with the view of attracting gains from the expenditures made by the visiting persons. Tourism could be organized to focus on varied items. It could focus on Religion, History, Culture, Medical, Sports, Geography and recently on Entertainment Festival as in the example of Calabar carnival. Calabar carnival is known as Africa’s biggest organized street party. The aim of creating such event was to make the Cross River State of Nigeria the number one tourist attraction for Nigerians and tourists all over the world. The name “Calabar carnival” suggests a focus on celebration, festivity, social merry making or entertainment.

The carnival which began in 2004 had been in existence in the past thirteen years. It often kick-off from 1st December but the latest one lasted till 31st December. Since its commencement, it has promoted talents and creativity; while entertaining the millions of spectators within and outside the country thereby boosting the entertainment industry and the country’s cultural heritage.

The 2017 edition of Calabar carnival themed “Migration” was unique and full of ecstasy and thrillers. The Governor – Professor Ben Ayade personally participated in thrilling the audience with a stylish ride on his red-scorpion trike (tricycle) during the bike carnival parade which headlined the carnival displays. No fewer than 250 bikers from within and outside the country also featured collectively in the carnival. Besides, the carnival featured an outpouring of colours, sounds, dancers and spectators that are incomparable with any other carnival in Africa.

Several competitive bands and non-competitive bands also featured in the event. These bands comprise of approximately 500 revelers each including kings and queens that are wearing large scale costumes that interprets the annual theme and set the tone for other outfits. It is obviously the largest cultural festival in Africa with over 50 million television views on both local and international television stations. Many of the costume revelers create variety of colours and sparkles

They also showcase their talents and skills along the streets accompanied by live music, D.Js, well decorated floats and steel bands. The carnival parade starts at various approved locations around Calabar Municipal and ends at the U. J. Esuene Stadium which is the final end point for announcing the winning band of the year.   Other features include carnival football competition, traditional drumming arts, crafts and Food festival, Calabar Beauty Queens pageantry, music shows featuring Hip-Hop artistes from within and outside Nigeria.

The Passion-4 Band emerged winner of the latest Calabar Band competition while Freedom Band and Bayside Band emerged 1st and 2nd runners-up respectively. The pronouncement was made by Mr. Gabe Onah who headed the Carnival Commission. The announcement stirred up jubilation from small number of the spectators while a huge number roared in disagreement with the announcement.

The prize has lifted the Passion-4 Band to its 8th trophy in the past 13 years of the carnival. By this win the band is being recognized as the most successful band in the Calabar carnival festival, having being eight editions champion, and two editions 1st runner-up in the last 13 years of the Carnival existence. A post script evaluation of the 2017 Calabar carnival would raise some questions among thinking ‘CrossRiverians’. Having spent believably huge amount of money on the 2017 carnival in this austere period, it is logical that one should not do jamboree for jamboree sake. It is therefore imperative for the crop of 2017 effective organizers to let the public know how much was spent on the latest carnival and how much was realized?

Also, how has it impacted on the economic and social life of the people of Cross River State? For example the carnival usually extended overnight till about 3 am during which miscreants dispossess spectators of their money, phones and other invaluable.   Besides, how much has the state profited from the carnival in terms of building International Relations for the improvement of the People and Government of Cross River State?

4 thoughts on “Tourism: Passion-4 Band in the storm of 2017 Calabar Carnival”