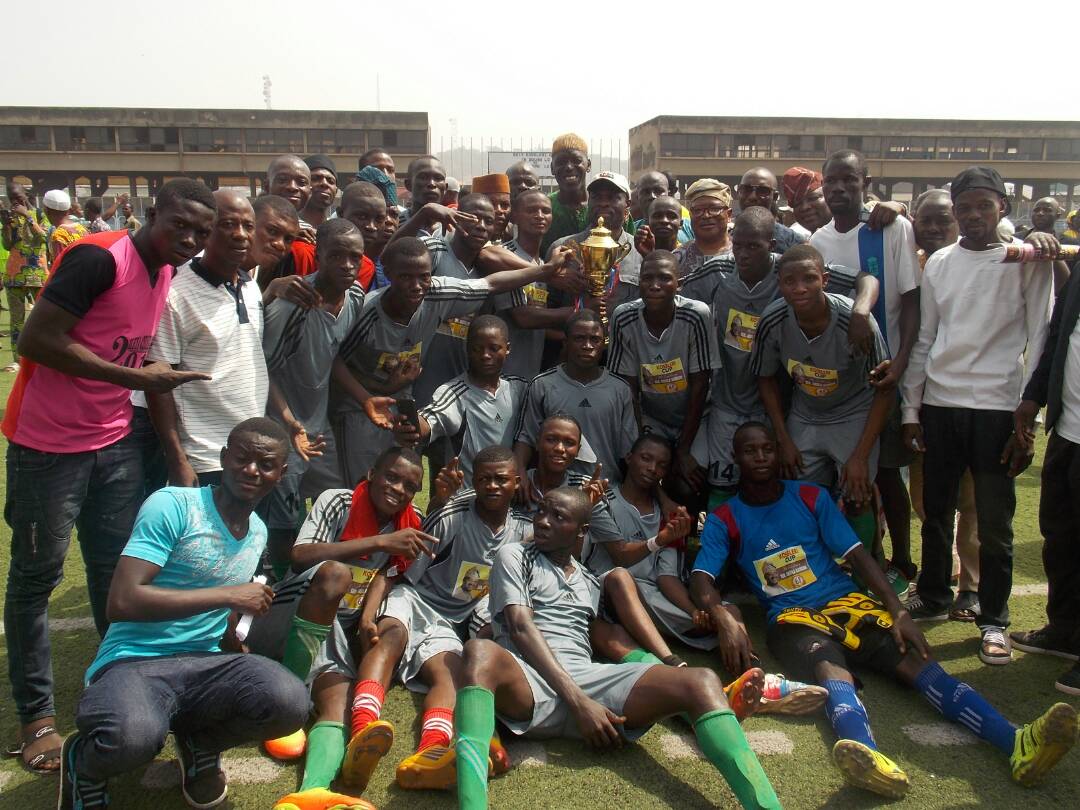 Victory in football can be achieved by thorough training, sound motivation of the team by the coach, frequent encouragement of players and team officials by the team manager and the total commitment of the team players; declared Coach Kunle Animasahun aka Bora of Irepo Local Government Football Club of Kisi Oyo State, Nigeria.

The declaration was made after his team had defeated Ibadan South West Local Government Football Club, Ring Road, Ibadan at Lekan Salami Stadium, Ibadan, Nigeria by 2 goals to nil to win the 2nd edition of “Koseleri” Governor’s Cup Under 16 Football Competition for the year 2017.

In the past, there had been Governor’s Football cup Competitions in Oyo State, but the ‘koseleri’ Governor’s Football Cup Competition was so branded to positively showcase Governor Abiola Ajimobi’s rare feat of winning a second term of Governorship election in the state. The competition was not so named during Governor Ajimobi’s first term in office.This year, 12 teams participated in the 2017 edition while Irepo F.C. of Kisi and Ibadan South West Local Government Football Club of Ibadan reached the final. Last year, Lagelu Grammar School Football team, Ibadan won the 1st edition of the Competition in 2016.

During the first half, both team played tough game and competitive. All efforts made by the teams to change the score sheet were fruitless and the game ended goalless in that half. Upon prompting, Coach Animasaun of Irepo F.C. disclosed that when he observed some lapses in his team’s mid-field during the first half of the game, he immideatly swung into action at the commencement of the second half of the game by quickly substituting Mudasiru Mubarak with Jersey number 14 for Abdulai Sadeek.    This change make possible impact in the mid-field of Irepo F.C. and the whole spectators observed a better Irepo team in terms of thorough passes, game control, more goal attempts and creation of more goal chances.

Immediately after the first goal, Ibadan South West F.C. returned to the field to take  total possession of the game. They attacked Irepo F.C. from both sides of the field, took the total control of the mid- field, and pressurize their opponent to the extent of playing half field against them. Despite the sustained pressure against Irepo F.C., it did not break.

Surprisingly, in the 86 minutes of the game, the score line changed into 2 – 0 in  favour of Irepo F.C.. This was made possible through a smart counter attack by Irepo F.C. and this yielded a goal through the same Ashiru Musakiru who lobbed the ball over the goal keeper of Ibadan South West F.C.

After the final match, both teams were honored by Oyo State Commissioner for Youths and Sports Barrister Abayomi Oke.

Thereafter, Ademola Oladele, a Public Times correspondent congratulated Coach Kunle Animasahun of Irepo F.C. of Kisi and his team on their great success. In response to some questions, he disclosed that he was recently transferred to Oke Ogun zone in July 2017 by Oyo State Sport Council and has his office at Saki where he coordinates sports matters in eight Local Governments and Irepo Local Government F.C. is in one of the Local Government Council area.. He added that at the on-going Speaker’s Cup which has reached the final stage, he registered five teams from different Local Government of his coverage with one of them slated to play the final and another already won the 3rd position.