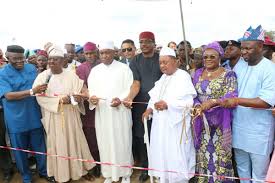 The hope of millions of Nigerians that the 33-kilometer road project of Oyo-Ogbomosho expressway, which had claimed many lives, would become a reality has somewhat hit the rock as the project seems to have been suspended again after the flag-off of its reconstruction last year.

It would be recalled that Gov. Abiola Ajimobi remarked during the flag-off last year, “We believe that the contractor will work day and night to deliver a standard job in good time. This road project was mooted over thirty-six years ago and we have had six federal administrations that failed to complete it.”

The inabiliy of the Federal Government to complete the reconstruction of the road, which is the section II of the Ibadan/Ilorin Expressway, might be connected to the recent comment made by the Minister of Works, Power and Housing, Mr Babatunde Raji Fasola, that the needed funds for the completion of all Federal Roads were not approved by the legislature.

According to the information made available to Public Times, a sum of N6 billion was provided in the 2016 budget for the completion of the suspended project. It is now a year since the resuscitation of the road project, it is yet to be completed or commissioned.

Many road users would be expecting the President Muhammadu Buhari-led government to swing into action for the speedy completion of the road project, which has failed for more than thirty-six years so as to reduce the number of accidents and to save the current administration from failing as other six previous administrations had failed on this project.